Sachs BioCapital USA Forum March 21, 2018 at the New York Academy of Sciences (NYAS) in New York City
Presenting a summary of its pending Phase 2b PD-LID clinical program and participating in the Renewed Approaches for Neuroscience Panel 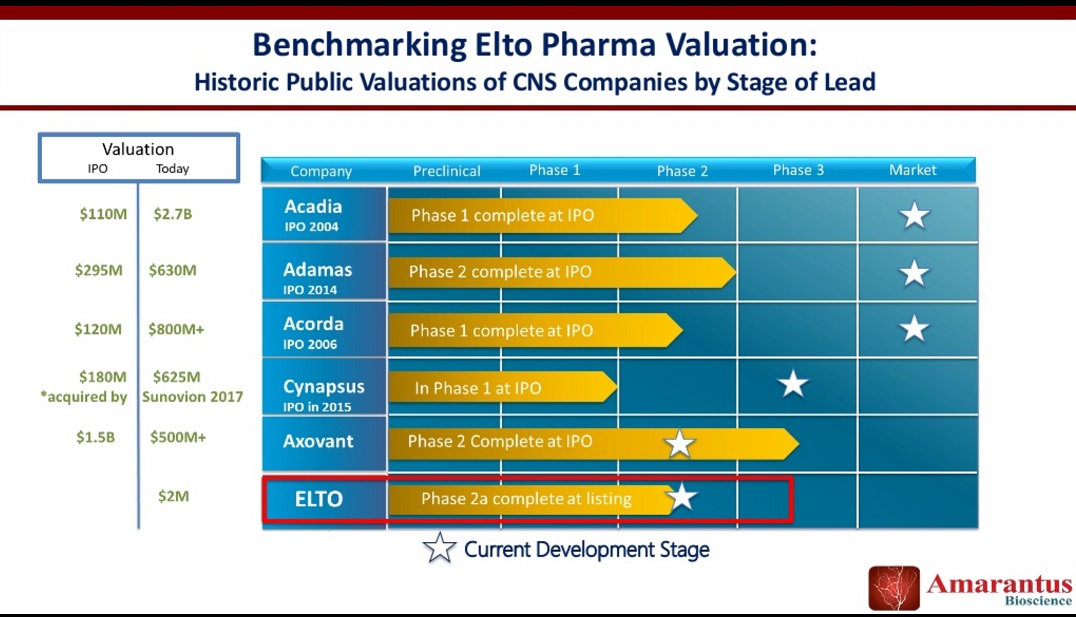 Elto Pharma, Inc. is developing Eltoprazine, an oral small molecule 5HT1A/1B partial agonist in clinical development for the treatment of Parkinson's disease levodopa-induced dyskinesia (PD-LID), Alzheimer's aggression and adult attention deficit hyperactivity disorder (adult ADHD). Eltoprazine has been evaluated in over 680 human subjects to date, and has a well-established safety profile, with statistically significant efficacy results across multiple central nervous system indications. Eltoprazine has received orphan drug designation (ODD) from the US FDA for the treatment of PD-LID.

Eltoprazine was originally developed by Solvay (now Abbvie) in aggression-related indications. The eltoprazine program was out-licensed to PsychoGenics, Inc. (PGI). PGI licensed eltoprazine to Amarantus in 2014 after a successful proof-of-concept trial in PD-LID.

In April 2017, Amarantus incorporated the wholly-owned subsidiary Elto Pharma, Inc. for the purpose of raising capital to finance the further clinical development of Eltoprazine.

Engineered Skin Substitute (ESS) is a tissue-engineered skin prepared from autologous (patient's own) skin cells. It is a combination of cultured epithelium and a collagen-dermal fibroblast implant that produces a skin substitute which contains both epidermal and dermal components. This model has been shown in preclinical studies to generate a functional skin barrier. Most importantly, because ESS is composed of a patient's own cells, it is less likely to be rejected by the immune system of the patient, unlike with porcine or cadaver grafts in which immune system rejection is a possibility. A non-GMP version ESS has been used in investigator-initiated and compassionate-use clinical settings in over 150 human subjects, primarily pediatric patients, for the treatment of severe burns up to 95% of total body surface area. The non-GMP version has also been used in the treatment of two patients with Giant Congenital Melanocytic Nevi (GCMN).

MANF (mesencephalic-astrocyte-derived neurotrophic factor) is believed to have broad potential because it is a naturally-occurring protein produced by the body to reduce/prevent apoptosis (cell death) in response to injury or disease, via the unfolded protein response. By administering exogenously produced MANF the body, Amarantus is seeking to use a regenerative medicine approach to assist the body with higher quantities of MANF when needed. Amarantus is the front-runner and primary holder of intellectual property around MANF, and is initially focusing on the development of MANF-based protein therapeutics.

In April 2017, Amarantus incorporated the wholly-owned subsidiary MANF Therapeutics, Inc. to focus on progressing preclinical and clinical development of MANF.

Is AMBS a Buy?