Back in a different lifetime, I was in the army I

Posted By: Bhawks
Back in a different lifetime, I was in the army
I didn't join. I was drafted.

It's in some ways an enlightening experience, as you meet people from just about everywhere. And, over time, you bond with some of them. Some of those bonds last a lifetime.

In many ways, we were all still children. Few of us understood or cared about politics. All we knew was that we were there and had to do battle against any "enemy" the government told us was an "enemy." We were well fed, well housed, well clothed, well trained and were able to put up with some of the horrible shit the army makes you put up with. It wasn't "fun & games," but you were a member of the "club." You belonged.

Many of the people I served with came from the South and, at first, I resented them. At that time, finding good employment in the South was difficult, so many men decided that their best bet was going into the service. Coming from the North, I wasn't used to their opinions, their world views and, in some cases, their bigotries.

My own army experiences are not important here. But the bullshit the Republican Party has fed to the American public for generations is where I'm going with this. The Republican Party has always claimed to be "holier than thou" on any issue concerning the well-being of the military and of its veterans. ITS ALWAYS BEEN BULLSHIT. It was just one more facade they put up to con the American public into thinking that Republicans are the "real" Americans and that all Democrats are "Commies" and worse.

What they just did yesterday, is what they've always done. But most of it wasn't this high profile. They've spent decades fucking veterans in the same way they just did. But few noticed before now. I'm still in touch with some friends I made in the military and even though some were "hard core Southerners," they know the Republican Party is fucking them and has been fucking them since day one. They "get it."

Meanwhile, those so-called "Commie" Democrats have done everything possible to improve benefits for veterans and to raise the standard of living for all.

Fuck Ted Cruz, Josh Hawley, Mitch McConnell, Tom Cotton, and every one of those motherfu***ng pieces of garbage. They don't care who lives or who dies, who prospers or who ends up homeless, or anyone living out their days, helpless and hopeless, in some dilapidated VA hospital. Fuck the Republican Party in which so many seek to hold the title of America's first "fuehrer." 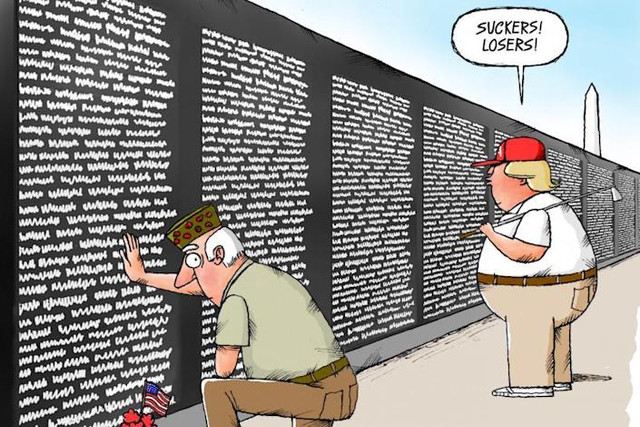 11. Wingnuts are mostly non-serving, in prior eras *pay* for substitutes

Great OP, cogent overview of the military experience - the broadening of *our* minds to those of others' "opinions, their world views and, in some cases, their bigotries. Disagree that your experience is "not important."

Besides the main topic of the Repukes' latest vote, your context with the personal sub-topics are priceless to civilian brethren who have always struggled to understand vets and mostly end up giving up on them/us. I dare say many - MANY - were snookered by the Repukes' propaganda about their "patriotism" and how they were the champions of the military and law enforcement.

*** Sub-topic: "good employment in the South was difficult, so many men decided that their best bet was going into the service." The only other one I've ever heard express this was former Rep. Charlie RANGEL, who said the reason that Minorities were over-represented in the military and in fatalities was that they enlisted because of *economics*, lack of opportunities in education and employment, not for ideology ("fighting Commies" ). I wasn't drafted, did my enlisting while my generational peers were protesting mainly regarding the Draft. And for the RANGEL reason: Economics.