Posted By: Bhawks
How stupid is Trump - Interesting article 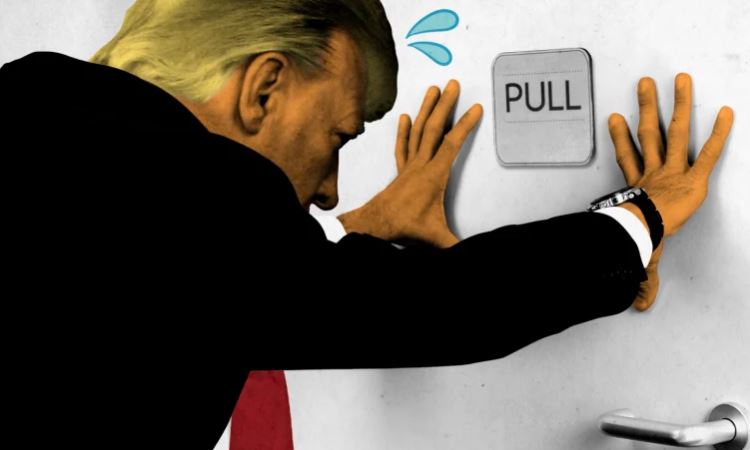 Donald Trump is many things, but he is first and foremost a moron.

This doesn't mean he isn't other things as well — malicious, cruel, greedy, self-obsessed, unusually adept at demagoguery. But above all else, he is an imbecile who led an administration dominated by imbeciles. If he manages to get himself elected president again in 2024, the executive branch of the government in the most powerful nation on Earth will once more be led by half-wits and dopes.

Do you doubt it? How quickly we forget!

The 2020 presidential election took place just over a year ago. It took three days for the results to become sufficiently clear for Joe Biden to be declared the winner. The day after that, Trump's lawyer and adviser Rudy Giuliani called a press conference at the Four Seasons in Philadelphia to dispute those results.

Only instead of the event taking place at the five-star hotel of that name in Center City, it was mistakenly booked at the Four Seasons Total Landscaping company in an outlying industrial part of the city. There he and a small number of staffers and Trump loyalists stood before the press, campaign signs taped to the wall of a garage door.

Over the next two months Giuliani repeatedly advanced Trump's claims of election fraud in public. On one occasion he did so with black hair dye running down the side of face.

He was also joined by several other defenders — people such as My Pillow CEO Mike Lindell, and lawyers Sidney Powell and Lyn Wood, who made claims about the deceased Venezuelan strongman Hugo Chavez somehow manipulating American election results from beyond the grave or China pulling mysterious strings to deny Trump his victory.

These were not madmen ranting on some closed-circuit television channel. They were people either working for the president of the United States or granted regular access to the Oval Office, where Trump eagerly drank in their idiocy.

To those who say this shows that Trump was broken by his electoral defeat, one can only respond: Do you not recall one of the very first things the 45th president did upon arriving in the White House in January 2017 was to insist the size of the crowd at his inauguration surpassed the one that gathered for Barack Obama's eight years before?

And that Trump insisted on this despite the existence of photographs clearly demonstrating it wasn't true? And that he forced his press secretary to repeat this blatant nonsense before a roomful of journalists as well? Trump's four years in office was a real time test of whether the country could survive being led by an ignoramus.

The good news: We passed!

The bad news: It could have been much, much worse — and Trump shows every sign of wanting to continue the examination for another four years.

But wait, isn't Trump's imbecility a good thing overall? We hear this argument a lot — that, yes, Trump is a dolt, but this keeps him from doing even more damage. Far worse would be a competent Republican like former Vice President Mike Pence or Florida Gov. Ron DeSantis or just about anyone else, who would be more capable of enacting his right-wing agenda and subverting democracy.

I'm sorry, but this is incredibly foolish.

Trump's stupidity, his inability to accept his own loss in the election, his withdrawal into a fantasy reality in which he could reverse the results, and his willingness to listen to other morons who encouraged that idiocy — all of these things are deeply intertwined.

It's true a less foolhardy Republican president would be more competent at governing. But this president would also be far more capable of accepting a political loss, not to mention other inconvenient aspects of reality. When it comes to evaluating fitness for high political office, such a capacity should be considered an absolute bare minimum.

We have trouble acknowledging this because it's challenging to grasp the depth and precise character of Trump's imbecility. It's not that he lacks an education, or that he doesn't have certain talents in abundance — above all, the ability to tap into and exploit the prejudices and fears of a culturally alienated and resentful segment of the electorate.

Trump's stupidity has different sources. It arises from emotional defects. He is so incapable of accepting failure that he warps reality around himself, constructing alternatives to the way the world is and then plunging into them, no matter how fantastically daft they happen to be. That makes Trump's idiocy next of kin to outright delusion.

It's bad enough for people like Giuliani, Lindell, Powell, and Wood to be circling the White House, seeking to exert influence on the president. It's far, far worse for the president to listen to what these morons say and think, "Yes, this is good advice." That shows an almost psychotic level of inanity.

Even worse, when the person sitting behind the Resolute Desk is that easily manipulated, he might also come under the influence of people who aren't morons but who want to advance their own agendas by preying on presidential witlessness. Think here of John Eastman, the conservative legal scholar who convinced Trump in the days leading up to Jan. 6 that Mike Pence could single-handedly act to keep Congress from certifying Joe Biden's electoral victory.

Add it all up and it becomes clear why the worst possible outcome three years from now would be Donald Trump winning back the White House. That would be vastly worse than Pence winning or DeSantis winning or Nikki Haley winning or really anyone else in the GOP winning, except, perhaps, for those like Georgia Rep. Marjorie Taylor Greene or Arizona state Sen. Wendy Rogers, who might actually be as moronic as Trump himself.

The dangerous and demoralizing truth is that the GOP is now divided into three camps: an endangered species of dissenters like Wyoming Rep. Liz Cheney and Illinois Rep. Adam Kinzinger, who reject the drift of the party into outright lunacy; a larger portion of people (including Greene, Rogers, and others) who may well be as thick-headed as Trump himself; and a much larger number of people who have resigned themselves to playing along with the stupidity encouraged by the man running the Republican show. The last group includes pretty much everyone entertaining a run for the White House in 2024 who isn't named Trump.

Now don't get me wrong: It's bad to elevate public figures who feign imbecility for political gain. But it's worse for the man elected to the nation's highest office to be a genuine moron.

Thanks to the ongoing devolution of the Republican Party, American voters and political analysts have no choice but to render judgments on the basis of precisely such nuanced distinctions.

25. Try to find a sunny side to the gloom

what I do when I hear he is out golfing, is cherish the thought that maybe, just maybe, a jet on runway approach over one of his golf courses will drop one of those giant blue chemical toilet icebergs and crush his flabby ass dead on the back nine.

15. Reverse the results? Well, the execution was stupid on a level of the....

beer hall putsch taking over the government of Bavaria. The idea, however, isn't delusional or stupid, just poorly executed this time. With the right planning and support, it very well could have succeeded. And 1/3 to 40% of the populace would support it wholeheartedly.

I agree that his mental illness (malignant narcissism) prevents him from using whatever intellect he has in an effective way. I also believe that his intellect is average at most, and probably on the low side of that (based on what we know of his educational history). It's a deadly combination for the office he held (and wants to hold again), in which high level decision-making skills are of critical importance.