Quote: We are immensely grateful to all to all of those that helped us with the production, and we are excited to learn that approximately FORTY-MILLION (40,000,000) Americans will see "WILDFIRE" (along with all of the businesses, sites and scenery of TAHLEQUAH) during the film's release to Television, Streaming, and Home Video next year (viewership numbers are Studio projections).


Greetings to our HHSE Friends & Followers - and to all of you, regardless of faith, "L'Shana Tova."

Over the past two weeks, we have received a greater level of shareholder inquiries than customary. Nearly all ask for updates on the same subject topics. Public company disclosure protocol requires that we share news to all shareholders simultaneously. So, we apologize for not responding directly or sooner to those who have sent emails to Eric Parkinson or Fred Shefte.

One key issue that our securities counsel has advised: be more concise and specific with regard to items of a material nature in all Blog and Press Announcements. Accordingly, we will be a brief as possible in this Blog update.

a). There are no material obstructions or issues to impact this filing;

b). We are not telegraphing or specifying the date of the registration;

c). HHSE will be simultaneously subscribing to the OTCQB Markets (which is why we have not renewed the OTC "Pinksheet" subscription, and therefore currently are listed as "limited information" with the Yield sign).

a). Filing is completed and will be made a few days AFTER the Form 10 Registration.

b). Company believes that the first round of shares ($1.5-mm) will likely be purchased very quickly from media companies that have reached out to HHSE / MyFlix.

a). Company has licensed the film with a Major Studio Partner; details will be announced separately;

b). Filming has resumed;

d). Closed Set and Publicity Moratorium - under the terms of the studio distribution pact, we are not able to release SET PHOTOS, CASTING UPDATES or even social media posts about the final shooting days of "WILDFIRE" without their expressed, written and prior consent.

a). Three (3) separate agencies are working with HHSE / VODWIZ on the key elements of the MyFlix site and promotion, specifically: KEY SITE design, APP design and Digital / Social Media Marketing and Promotions.

b). Site Launch will be determined by the completion of the site, APP and campaign, as well as placement of some key titles as locomotives (the rights for which have been obtained, but which are presently being "on-boarded"

c). Website will have an "interim" update this week, prior to the formal launch of the interactive consumer site.

a). Prior plans for four (4) new titles (DVD - BluRay) were delayed due to COVID impacting retail placement of titles. However, company has worked a placement strategy to release TWO (2) titles each for JANUARY, FEBRUARY and MARCH, 2021 (total of six physical home video releases).

b). Four of the titles for Physical release during Q1, 2021 will also be "MyFlix Exclusives" (in that they will be available for streaming SOLELY via MyFlix).

S1 USE OF PROCEEDS

a). The Form 10 and S1 Filings both describe the updated planned use of proceeds from the S1 Registration. However, company has not deviated from the previously announced strategy of seventy percent (70%) of funds raised to be used for new release activities, operations and MyFlix, with the remaining thirty percent (30%) utilized for payables / debt management. 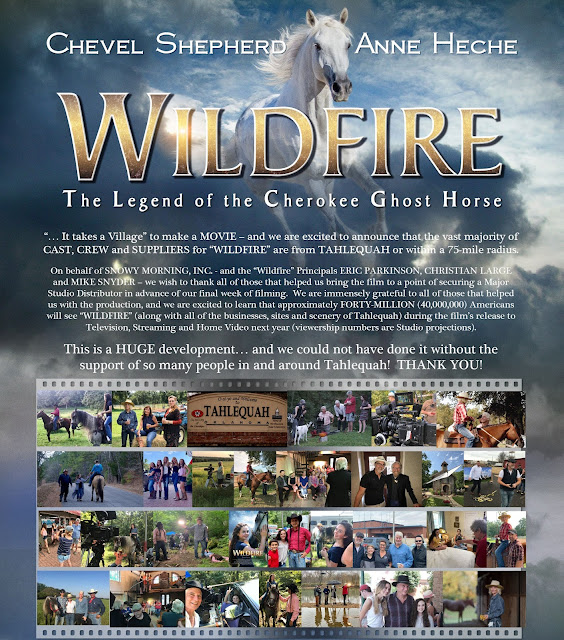 The Legend of the Cherokee Ghost Horse

".... It takes a Village" to make a Movie - and we excited to announce that the vast majority of CAST, CREW and SUPPLIERS for "WILDFIRE" are from TAHLEQUAH or within a 75-mile radius.

On behalf of SNOWY MORNING, INC. - and the "Wildfire" Principals ERIC PARKINSON, CHRISTIAN LARGE, and MIKE SNYDER - we wish to thank all of those that helped us bring the film to a point of securing a Major Studio Distributor in advance of our final week of filming. We are immensely grateful to all to all of those that helped us with the production, and we are excited to learn that approximately FORTY-MILLION (40,000,000) Americans will see "WILDFIRE" (along with all of the businesses, sites and scenery of TAHLEQUAH) during the film's release to Television, Streaming, and Home Video next year (viewership numbers are Studio projections).

This is a HUGE development... and we could not have done it without the support of so many people in and around Tahlequah! THANK YOU!