Posted By: Bhawks
Re: Shady #50224
How Iowa’s Governor Went From Dismissing Mask Mandates to Ordering One Herself

“I don’t want to do this,” Gov. Kim Reynolds said, joining a wave of Republican governors issuing new mask orders as her state faces a spiraling hospital crisis.

I don't want to do this? Really? Could she be more infantile, more in denial? The 'tyranny' of a mask mandate VS the 'lethal tyranny of the stupid'. Yeah, that's a tough choice.

Iowa’s governor this week ordered that people wear masks while indoors, a reversal after months of saying that she did not support a mask mandate. 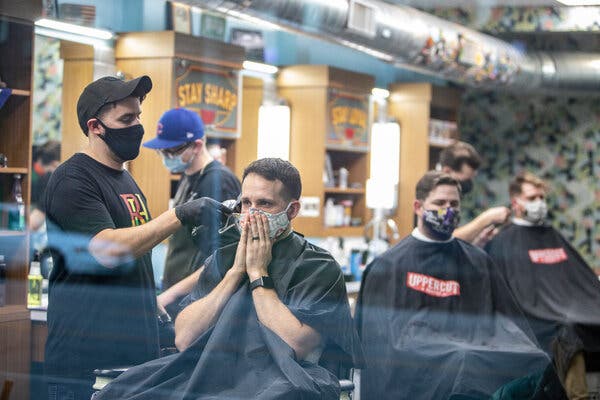 Iowa’s governor this week ordered that people wear masks while indoors, a reversal after months of saying that she did not support a mask mandate.Credit...Kathryn Gamble for The New York Times

For months, Gov. Kim Reynolds of Iowa saw little need to intervene in the choices of Iowans, who she insisted could make their own decisions about whether to wear a mask to protect against a dangerous pandemic.

“No, I’m not going to mandate masks,” she said this summer, dismissing the order as an unenforceable “feel-good” measure. “I believe in Iowans,” she said again in September. Weeks later, as coronavirus cases climbed precipitously, she stood barefaced onstage at a rally for President Trump and threw “Make America Great Again” hats into a crowd.

But as the virus ravaged her state and hospitals filled to the brink, Ms. Reynolds abruptly reversed herself this week and began requiring masks indoors. She joined a wave of Republican governors who are newly and at times reluctantly wielding the power of their offices as the coronavirus erupts to crisis levels across the United States. On Wednesday, the country passed 250,000 virus-related deaths, with no end in sight.

“No one wants to do this,” Ms. Reynolds said in a live address to Iowa, which has the third-highest rate of new cases in the nation. “I don’t want to do this.”

Ms. Reynolds has offered little insight into her reversal, but interviews with more than a dozen political, health and business leaders in Iowa — some of whom the governor consulted before issuing the order — show that her hand was forced by a spiraling hospital crisis. As pressure built from doctors, mayors and even people serving in her own administration, the message was clear: If she did not act, Iowa’s hospitals could soon be overflowing with coronavirus patients, leaving few ambulances, beds or doctors left to care for anyone else.

“It says that it’s serious,” said A.J. Spiker, a former chairman of the Iowa Republican Party who worked alongside Ms. Reynolds when she was the lieutenant governor, describing a particularly emotional and urgent tone in her announcement. “Just the way she said things as she spoke, I know her well enough to know that she’s concerned.” 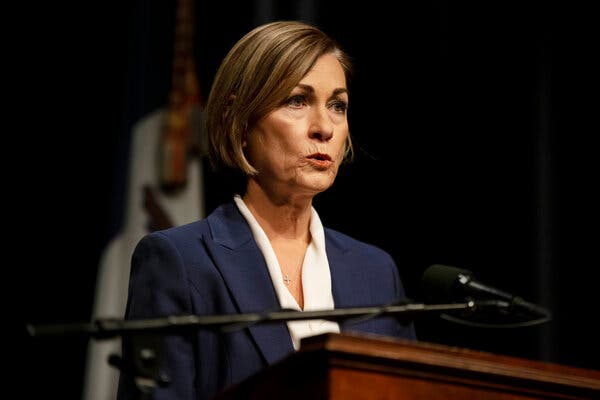 Ms. Reynolds’s reversal comes as other Republican governors are moving to embrace directives they once eschewed. The governors of North Dakota and Utah have also issued mask mandates in recent days, while still resisting the more aggressive approach taken by Democrats who are again shutting down indoor dining at restaurants and closing other businesses where the virus is known to spread.

The changes reflect both the increasing threat the coronavirus poses in the United States, as well as the shifting political landscape.

The country is recording more than 158,000 new cases per day on average, the highest so far of the pandemic; more than 76,000 people are hospitalized with the virus nationwide, far higher than earlier peaks; and deaths are again on the rise. President Trump has largely ceded the pandemic response to governors, and the states where the virus is emerging at the highest rates — North Dakota, South Dakota and Iowa — are all Republican-led.

In Iowa, Ms. Reynolds had been facing pressure for months — from mayors, doctors, nurses and farmers, who feared that rising cases could lead to interruptions to the food supply chain in a state where agriculture and meat processing are major industries.

Like most other governors, Ms. Reynolds closed down businesses in the spring, but she resisted issuing a stay-at-home order and did not require masks as communities reopened.

Now, as the virus surges across the Midwest, more than 4,100 people are testing positive for the virus in Iowa every day on average, an 86 percent increase over the last two weeks. Hospitalizations have doubled in the same period, and coronavirus patients now make up one out of every four hospitalizations in the state.

The crisis led to a significant move last week, when the Iowa State Board of Health, whose members Ms. Reynolds appointed, urged her to issue a mask mandate. The board’s vote was itself a sign of how the virus’s worsening toll has forced people to change their thinking. Board members, most of whom are Republicans and work in health care, had discussed face coverings at previous meetings but did not come out in favor of a mandate.

At the most recent meeting, however, they voted 7 to 2 to encourage the governor to issue the order.

“Circumstances have changed enough in Iowa,” said Chris Atchison, the board’s vice chair, who said he could recall only one other instance in which members had made a recommendation to the governor in his more than three years on the board.

Suresh Gunasekaran, chief executive of the University of Iowa Hospitals and Clinics, said that the governor had become increasingly focused in recent weeks on the swell of patients hospitalized with Covid-19, and the rising percentage of hospital beds that were devoted to them.

“What has really changed in the last couple of weeks is the hospitalization rate,” Mr. Gunasekaran said, describing his regular discussions with the governor, her aides and health officials in the state. “I think that was what really persuaded the whole state, including the governor.

The governor began moving to tighten restrictions last week, requiring masks in some circumstances and tightening the rules on attendees at youth sports games and other events.

“If Iowans don’t buy into this, we lose,” Ms. Reynolds said, warning that the hospital system could collapse. “The cost in human life will be high.”

Still, her order contains a number of exceptions. People must wear a mask in indoor public places, but only if they will be within six feet of another person for at least 15 minutes. Indoor dining is still permitted. School districts are allowed to decide for themselves whether or not to require masks; about one third of Iowa’s school districts currently do not require them.

Health experts say masks are crucial to stopping airborne virus particles from spreading, and protect both the wearer and others.

At a news conference on Tuesday, Ms. Reynolds at one point seemed to equivocate on the effectiveness of masks, saying “there’s science on both sides” and “if you look, you can find whatever you want to support wherever you’re at.” But when asked how Iowans should sort through the range of exceptions, she was straightforward: “If they’re confused,” she said, “I’d say just put the mask on.”

Scoffing at the mixed messaging, Democrats in Iowa criticized the order as a half-measure that would do little to quell a growing crisis.

“This would have been a good thing to do in early October,” said Rob Hogg, a Democratic state senator in Iowa who was among those who wondered whether Ms. Reynolds, an ally of Mr. Trump, may have been reluctant to take action earlier and risk angering conservatives or the president in the weeks before the election.

A spokesman for Ms. Reynolds said that the election was not a factor in her decision. He declined to elaborate on the shift in her thinking, and said she was not available for an interview.

But as the situation deteriorated in Iowa and across the country, her perspective seemed to change.

Mayor Brad Hart of Cedar Rapids, a Republican in a nonpartisan office, said that he had spoken to the governor months ago to see if there was any possibility of a statewide mask mandate. “We talked a lot about it and she just had a different view,” said Mr. Hart, who came to believe that a statewide mandate “wasn’t going to happen.”

He decided to issue his own order for his city of 133,500, even though he said he had been told by the governor’s office that he did not have the authority to do so. Afterward, he noticed a significant increase in the number of people wearing masks, and he said the governor did not push back.

But by this month, Ms. Reynolds had begun reaching out with the intention of swaying public opinion.

Tom Vilsack, a former Democratic governor of Iowa, said Ms. Reynolds called him in recent days and asked him to record a public service announcement urging the public to wear masks.

Underscoring the surge of cases in Iowa and across the country recently, many Iowans have recently learned for the first time that they know someone who had contracted the coronavirus. In one high-profile example, Senator Charles E. Grassley of Iowa, the oldest Republican in the Senate, announced he had tested positive this week.

“When you start knowing the people that actually have contracted the virus and are impacted by it then it becomes more real,” Mr. Vilsack said.

Mayor Mike Matson of Davenport, Iowa’s third-largest city with a population of about 101,500, said he had been in touch with the governor in recent weeks and had relayed the concerns of hospital administrators and health officials who were growing increasingly panicked about rising hospitalizations, I.C.U. space, and the pressures on hospital staff.

“She has been very gracious to listen to me,” said Mr. Matson, a Democrat, who said he had spoken with the governor by phone and via text message. “I just wanted her from my perspective to know how serious it is.”

Mayor Bob Scott of Sioux City, whose position is nonpartisan, said he similarly wished Ms. Reynolds had issued the order sooner and worried that the crisis was already spinning out of control.

“This should have happened three weeks ago,” he said, pointing to the dwindling room at hospitals. “We don’t have that many beds left.”