Greetings HHSE Shareholders & Friends - Quick summaries on items and issues that Shareholders have been asking about:


OTC MARKETS LISTING - It's been TWO (2) weeks since HHSE paid the renewal fee for our OTC Markets access restoral... and 10-days since we provided additional funds and documents as were requested at that time. In the past, whenever the OTC Pinks subscription expired, all we had to do was wire the funds and it would be resolved the next day. Now, however, there are new procedures regarding reinstatement of listed equities... including a thorough review of the HHSE shareholder's lists (including both Objecting Beneficial Owners - OBOs - and Non-Objecting Beneficial Owners - NOBOs), which the OTC Markets told us "normally takes three weeks" under this new procedure. That said, the primary OTC Markets representative that has been helping HHSE over the past few years said that it was LIKELY that we will be reactivated by tomorrow (Friday, Oct. 16), based on our 10+ years of prior membership and their effort to push us through as a priority issuer. We will update this BLOG as soon as we are reactivated... which could be tomorrow. SUNDAY UPDATE - HHSE was approved by the OTC Markets - after the review of the Shareholder's list - on Friday evening, and our active status has been reinstated. However, our ability to upload the Q2 and Q3 financials requires a manual entry tomorrow - so that will now happen and enable us to restore "current" listing for the company .

Q2 / Q3 FILING & AUDITS - Once the OTC Markets access is restored, we will file the Q2 and Q3 filings in order to be restored to "current" status. We have also sent the auditors the Q3 reports for inclusion in the Form 10 filing, to preserve the recency of the financials.


MYFLIX INITIAL LAUNCH - We did not hit our target response goals with the initial web teaser ads... which our marketing team consensus blames on "poor graphics" and "too much text." We are reworking these layouts and will try again. That said, the point of these quiet tests is to tweak the promo ads BEFORE we launch the site... so that the day we turn on the MyFlix site and APP, that we have a major consumer blast campaign ready to activate (and one that we have determined "works"


Some Shareholders have also asked for a pre-Form 10 update on a few LEGAL issues for Hannover House. Without revealing the strategies of our attorneys, we can provide these summarized updates:


1). LEWIN vs. HANNOVER HOUSE (and officers) - This was a New York case from an investor in the movie "DANCIN' IT'S ON" - who was not the actual licensor or contracting party for that film with Hannover House. Mr. Lewin sued Hannover House and its officers, and we responded (back in 2017) with New York counsel. However, without approval or prior notification, the NY Counsel "withdrew" the affirmative responses from the named defendants, resulting in a default entry. Lewin's New York attorneys then hired an Arkansas collections attorney to attempt to enforce the foreign judgment. We are advised that HHSE (and officers) now have three (3) years to file to set-aside the foreign default on the basis of fraud. Meanwhile, the Arkansas collections attorney has issued garnishments at randomly selected parties (all of which are "misses" as far as being actual suppliers, banks or asset holders for HHSE and its officers). Post Form 10, we will file the motion to set this aside and if so required, to actually defend based on the absence of any agreements with Lewin.


2). UPTONE PICTURES vs. HANNOVER HOUSE (and officers) - A settlement in the "Union Bound" release venture was made in 2017, and was fully satisfied by HHSE (which is not a matter of opinion, it's objective and measurable fact). Despite the settlement performance, UPTONE filed a whole NEW lawsuit and won a default in California (despite never serving the parties). Again, Post Form 10, HHSE will take the appropriate steps to file to set this aside.


3). GETTING GRACE vs. HANNOVER HOUSE (and officers) - We prevailed in getting the case moved out of Pennsylvania and into Arkansas. While we are focused this week on some defensive (court-ordered / mandatory filings), within the next two weeks we will file our affirmative defenses to the lawsuit and the counter-claim for their improper termination of the agreement and engagement of another distributor (and then STILL suing for performance of the agreement that they terminated). It should be an obtainable win for HHSE. For what it's worth, it is our belief that there are both moral and legal questions regarding selling a film to TWO (2) different distributors, not informing the first distributor (who purportedly was a "friend" of the licensor) and then SUING the first company who thought they had the rights. We are so very disappointed in not being informed about such a major, material development - and then SUING us for payment of the minimum guarantee payment (that through Getting Grace's actions rendered impossible to achieve by virtue of selling the property twice).

In any event, we are cautiously optimistic that the Arkansas courts will evaluate this matter based on the factual record. Below is a photograph taken of HHSE C.E.O. Eric Parkinson with Getting Grace principal Daniel Roebuck - which we have since discovered was nearly sixty days AFTER Roebuck and Getting Grace had already hired ANOTHER DISTRIBUTOR for the film without telling "his dear friend, Eric Parkinson." The facts are on HHSE's side, so we hope that an impartial judicial analysis will result in our victory in this matter.

SUNDAY UPDATE (Oct. 18) - HHSE managers have received emails this weekend from shareholders requesting an update on the GETTING GRACE court issues from last week (and this coming week). Here's the summary: on Tuesday, Oct. 13, Steven Kay, Esq., and Kate Johnson, Esq. contacted the court and opposing counsel to formally notify them as representing all remaining defendants. On Friday, Oct. 16, over 800 pages of Discovery and Interoggatories were delivered to opposing counsel, as per the court schedule. Tomorrow (Monday, Oct. 19), the HHSE attorneys will participate in a "status conference" with the court to verify that HHSE complied with the transfer orders... and to set a schedule for the ANSWER and COUNTER-CLAIM to the REVISED COMPLAINT, as well as Defendant's Discovery and Interoggatories against Plaintiff. Due to the facts of the case - most notably that Getting Grace, LLC hired a distributor during the term of HHSE's exclusive representation - it is difficult to envision a scenario in which HHSE will not prevail. Will update as information merits.

HHSE and MYFLIX have a winning business plan that completely AVOIDS the LUNACY of dealing with micro-budgeted Indie Producers and the acquisition of third-party titles for distribution. HHSE has developed a financing structure for the production of HIGH-END feature films (with significant budgets and legitimate stars), and on the opposite end of the spectrum, MYFLIX is riding the Tsunami Wave of consumers gravitating away from DVD and BluRay in favor of streaming directly to their homes. Two solid business models... combined for strength and diversity as HHSE matures into the ever evolving home entertainment market. 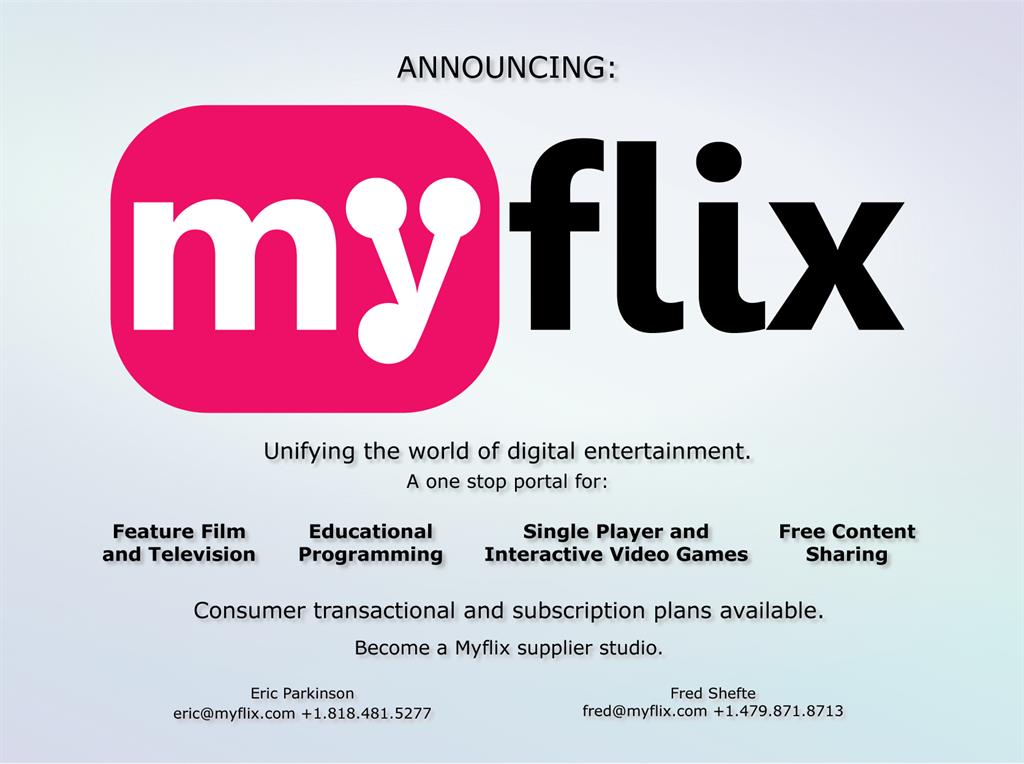