BUSTED !!!! now we know where Orange Hair got his

Posted By: nlightn
BUSTED !!!! now we know where Orange Hair got his idea for nuking a hurricane,... 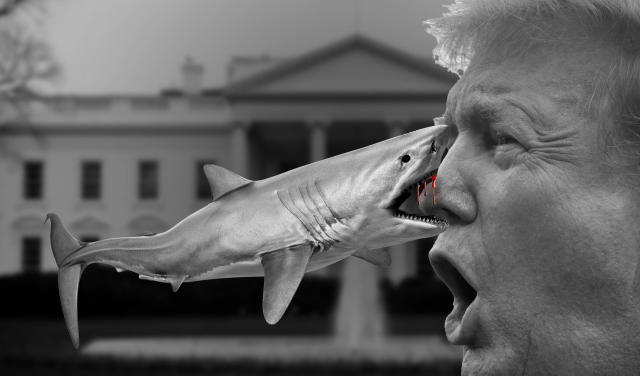 According to a new report from Axios, President Donald Trump has “suggested multiple times” to senior homeland and national security officials that they should “explore using nuclear bombs to stop hurricanes from hitting the United States.”

It didn’t take long for people on Twitter to ask: Wait, isn’t that what happens in “Sharknado”?

It’s interesting that Trump’s name has come up in connection with a “Sharknado” plot point, considering he was reportedly originally slated to play the president in 2015′s “Sharknado 3.”

According to a Hollywood Reporter story, Trump had stalled signing his “Sharknado 3” contract while mulling over his real-life presidential run. The production team then went with Mark Cuban instead for “Sharknado” duties, much to the chagrin of the now-president.

In addition to taking a bite out of the supposed plan to blow up hurricanes, Levin also said he was sorry Trump didn’t make his “Sharknado” debut.