Posted By: Lmcat
Jose Evis Quintana, 33, was jailed for 15 months for domestic violence against McKinney's mother Morgan Lynn McKinney and 'menacing with a weapon' 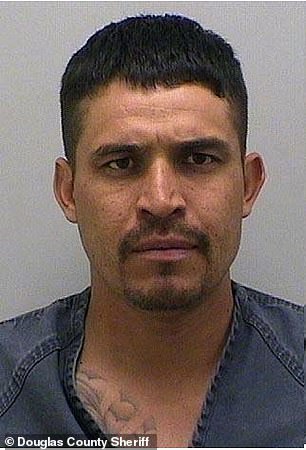 Despite terrorizing Morgan, 32, he convinced her to marry him in 2009 in Castle Rock, Colorado
He was deported back to Mexico in 2010 and Morgan, who has three children including Alec with Quintana, divorced him in 2015
Quintana illegally came back into the country and was deported again in 2017
Alec posted on twitter how he missed his father - just 11 days before the May 7 shooting at STEM School Highlands Ranch near Denver, Colorado
Alec and friend Devon Erickson, 18, allegedly shot nine students, killing one, and will appear in court on Wednesday May 15

Records at Douglas County District Court in Castle Rock, Colorado show Quintana had been jailed for 15 months in August 2009 for 'menacing with a weapon' and domestic violence against hairstylist Morgan.

Despite the sentence and the crimes Quintana committed against her, Morgan married Quintana in Castle Rock on November 28, 2009.

Qintana was then deported and sent back to Mexico on December 9, 2010.

In divorce papers filed by Morgan on November 19, 2014, Morgan described how Quintana 'has been traveling illegally between Colorado and Mexico' since the deportation.

Morgan was never able to serve her husband with papers but the court granted her a divorce on May 11, 2015.

On December 27, 2016, police in Castle Rock learned a warrant had been issued against Quintana in New Mexico for domestic violence.

They found him at a house in Castle Rock and arrested him for being a fugitive from justice. He was jailed pending his extradition to New Mexico.
Alleged school shooter Alec McKinney (right) with mother Morgan McKinney (left) in 201
+7

Quintana never made it to New Mexico. On April 21, 2017, he was taken into custody by Immigration and Customs Enforcement (ICE) and deported.

August 22, 2008 - Arrested by Douglas County Sheriff's in Castle Rock, Colorado for kidnapping, menacing with a weapon, evading police in a car, and driving without a valid license. He is released on bail

December 15, 2008 - Arrested for breaking bail conditions and held in custody

February 2, 2009 - Arrested for failing to speak to court staff. He is jailed again.

July 10, 2009 - Arrested for breaking the protection order, a domestic violence offense, he is sent back to jail.

September 11, 2009 - All charges bar menacing with a weapon are dropped and after pleading guilty he serves 15 months in prison.

December 27, 2016 - Douglas County Sheriff's Department are alerted he is wanted as a fugitive for a domestic violence crime in New Mexico. They arrest him in Castle Rock.