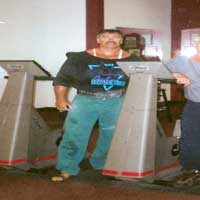 In 2015 when the feasibility study hits the market this symbol could rock.
Niobium is an incredible element and has many uses see below:

Niobium is used in many alloys. An alloy is made by melting and mixing two or more metals. The mixture has properties different from those of the individual metals. Niobium alloys are used in items that come into contact with the human body, such as rings for pierced ears, nose, and other body parts. Niobium is used in this kind of jewelry because it does not cause allergies or other problems.

Historians today give credit for the discovery of niobium to Hatchett. The English chemist found the element in a "very heavy black stone, with golden streaks" that he found in the British Museum. The stone had been sent to England from the United States by John Winthrop (1681-1747). Winthrop was a member of the British Royal Society, one of the most important scientific societies in the world. (He was also the grandson of the first governor of Connecticut and the great-grandson of the first governor of Massachusetts.) The rock had sat in the British Museum for nearly 70 years before anyone decided to analyze it. When Hatchett did so in 1801, he discovered a new element. He named it columbiun, after the mineral columbite in which it is often found.

Not everyone agreed with Hatchett's discovery at first. Some chemists were convinced that columbium was identical to the element tantalum, which had been discovered earlier. The confusion is easy to understand. The two elements have very similar properties and are difficult to separate. Finally, in 1844, German chemist Heinrich Rose (1795-1864) showed that tantalum and columbium really were different from each other. Rose then suggested the name niobium for the new element. The name comes from Greek mythology. Niobe is the daughter of the god Tantalus, from whom the name tantalum comes.

Scientists debated for nearly a century over which name to use. In 1949, niobium was officially adopted. However, many metallurgists (scientists who work with metals) still use the name columbium for the element.

Niobium metal is resistant to attack by most common chemicals. It does not combine with oxygen or most other active elements except at high temperatures. It does not react with most strong acids unless they are hot and concentrated.

Niobium occurs primarily in two minerals, columbite and pyrochlore. The original name columbium was taken from the first of these minerals. Niobium always occurs with tantalum in these minerals. Separating the two elements is always the most difficult step in their preparation.

Columbite and pyrochlore are not mined in the United States. These two minerals are imported primarily from Brazil and Canada.

Scientists believe that niobium's abundance in the Earth's crust is about 20 parts per million. That makes it about as abundant as nitrogen and lithium, and slightly more abundant than lead.

None of the radioactive isotopes of niobium have any practical application.

The first step in preparing niobium metal is to separate its compounds from tantalum in an ore. The niobium compounds are then heated in air to change them to niobium oxide (Nb2O5). This is then heated with charcoal (carbon) to produce free metal:

Niobium is used primarily in making alloys. For example, the addition of niobium to steel greatly increases its strength. One use of such steel is in the construction of nuclear reactors.

Nuclear reactors are devices in which the energy of nuclear reactions is converted to electricity. Niobium steel is used because it keeps its strength at the very high temperatures produced there.

Another popular use of niobium alloys is in the making of jewelry. These alloys are lightweight and hypoallergenic. The term hypoallergenic means that they do not cause skin reactions. People who wear pierced earrings or similar forms of jewelry will not develop skin problems from niobium alloy jewelry.

The most powerful magnets in the world are those made with superconducting materials. In 1997, a new record was set for superconducting magnets at the Lawrence Berkeley Laboratory in Berkeley, California. A magnet made with an alloy of niobium and tin proved to be three times as strong as the best magnet previously known.

Niobium alloys are used in jewelry because they are lightweight and hypoallergenic (won't cause skin reactions).

Neither niobium nor its compounds are known to pose serious health effects for humans and animals.